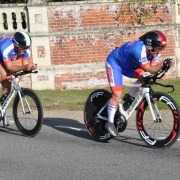 Nick Partridge of Velo Club Baracchi, riding in the Men’s National 10 Mile Championship on the A14, was timed in at 20:34, in 73rd place among a quality field of 137 finishers.

In the blustery conditions Charlie Quartermain of Zappi Racing Team, in 18:14 (32.9mph).

Everyone who commented agreed that the wind prevented faster times.

The winners of the club’s Baracchi Trophy shield for two-up time trial are Paul Hayward and Mark Saunders.

Stuart Supple set a new personal best 23:00 in the Stowmarket & District CC open 10 on the A14 from Rougham.  Second claim VCB member Lucas He (Cambridge University CC), took second place in 20:15 behind  Simon Hance of the home club (19:40).

Other VCB solo times were Dennington 23:19 and Supple 23:55. Alex He partnered Swanbury on the tandem for a second time and they upped their joint personal best to 23:34.

Paul Wright of VCB rode in the Gran Fondo World Championships in Poznan, Poland and said, “Certainly was Wacky Races, wacky roads (sections more like Roubaix with craters) wacky crashes and all that in 32 degrees heat.”

After about 35 or 40 miles a big group to his left went down in a heap. He said, “I just managed to avoid it by an instinctive move to the right, but that was is it. The peloton had pulled away and I found myself in a small group of about 8 to 10.”

Wright chased but others were not up for it. He managed to move up a group, with some solo riding after that and came in across the line after just over 93.5 miles in a creditable time of 3hrs 57mins.

Want to join the discussion?
Feel free to contribute!

Partridge 4th in Plomesgate open 10 with a course best 20:58
Scroll to top